26 Cycling Focused Strategies to get Stronger, Faster, and Fitter

Check out this post from MapMyRide.com, with awesome tips on improving your biking experience:

Don’t just hang with your fast friends—make them beg for mercy. These 26 proven strategies will turbocharge your training and make you stronger, faster, and fitter than ever. 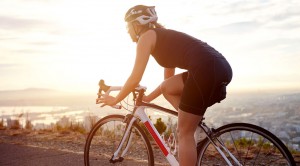 Pedal With More Power
Researchers have found that just one month of plyometric training (jumping exercises) twice a week can increase your power enduranceby 17 percent. This means you’ll be stomping out longer sprints and charging up hills in your big ring. Try squat jumps twice a week: Stand with feet shoulder-width apart, arms at sides. Sit into a squat, lowering until your thighs are parallel to the floor. Jump explosively and reach for the ceiling. Land gently and lower into another squat. Do two sets of 10.

Sprint in Winter
Try not to jam so much saddle time into the cold months that you’re torched by June. Instead, add power sprints— 5- to 10-second all-out efforts—to your riding, says Neal Henderson, founder of Boulder-based APEX Coaching. “You’ll add quality to compensate for what you aren’t doing in quantity, without overdoing it.”

Stay Sharp
Don’t cram in miles the week before an event or race. Keep your rides short, so your body can be rested and ready.

Avoid the Dead Zone
This condition, common among cyclists, is brought on by repeated training at a single, moderately hard intensity (the orange line in the example at right). It afflicts enthusiasts who push the pedals hard but don’t follow a training program, as well as amateur racers who have the great Eddy Merckx’s famous maxim, “ride lots,” indelibly burned into their brains. Those suffering from the malady may not be aware of it. That’s because, at a minimum, it maintains fitness, says Henderson. “You’re working kind of hard, but not doing a lot to change your physiology.” In order for your body to adapt and improve, you need to follow a program that hits the extremes, he says, especially the high end.

Eat on the Clock
On long rides, it’s easy to lose track of how much time has passed since you last ate or drank. One easy solution: Set reminders on your watch, phone, or bike computer for regular intervals. For example, every 10 to 15 minutes drink 4 to 6 ounces of water or sports drink; and every 15 to 20 minutes (after 45 minutes of riding), eat 7 to 10 grams of carbohydrates.

A Case for Cooldown
A study in the Journal of Strength and Conditioning Research found that when cyclists did a 15-minute cool-down spin at 30 percent of their maximum VO2 after a hard effort, they were able to perform almost as well 24 hours later on an identical strenuous workout.

Last-Minute Century Training Plan
Your plan was to be triple-digit fit by April. Now that 100-miler you registered for light-years ago is just a month away, and you’ve barely cracked 40. Do this century crash course (only if your fitness base already includes a few rides a week), and you’ll be ready to roll.

Shoot for 65
Coaches advise that you should do a 75-mile ride before your century. But you can squeak by with a long ride of 65 miles.

One Steady, One Speed, One Spin
Ride three or four days a week between now and the event: Ride long one day and at a fast pace another, with at least one easy-spin day in between. On your fast ride, try this: Warm up for 20 minutes, ride fast for 20, cool down for 20. Inch up the mileage on your easy rides by a mile or two as you progress toward the event. Follow our full-century training plan.

Go to Bed Already!
When you sleep, your body produces hormones that are critical to recovery. Research has shown that getting just two fewer hours of sleep than normal can slow your reaction time, an extra level of risk you don’t want when you’re navigating in traffic or a tight pack. It’s also a factor in performance, says Stanford University sleep researcher Cheri Mahf. In 2011, Mahf and her colleagues found that when athletes who were sleeping 6 to 8 hours a night aimed for closer to 10 hours, their reaction time and performance improved.

Get a Killer Jump
Practice standing starts: Using a big gear such as 53×19, roll to a slow speed, then accelerate at 100 percent effort as fast as possible for 20 to 30 pedal strokes. Begin with three or four sprints and build to six or seven. The first three pedal strokes are the most important; this is when the “sprint” message is transferred from your brain to the muscle fibers. Take the first stroke with your dominant leg, starting with the pedal at a two o’clock position.

Roll With It
The world would be a better place if we all had the luxury of a daily postride massage. With a foam roller you can pretty much do the job yourself— minus the harp music. “As you roll a muscle back and forth on the dense foam cylinder, adhesions and scar tissue break down,” says Scott Levin, MD, sports medicine specialist at Somers Orthopaedic Surgery and Sports Medicine Group in New York City. “It also warms and stretches muscles, increases circulation, and prevents soreness.”

Know your RHR
That’s your resting heart rate—taken in the morning before you get out of bed— and it’s one of the best ways to monitor overtraining. If your beats per minute are 10 percent higher than normal, that could be a warning that you may need to back off and take an easy day.

Reward Yourself
Giving yourself strategic incentives for positive behavior can prevent backsliding. Choose healthy incentives, such as a new jersey or gloves, rather than unhealthy options like, say, cake.

Learn more about these tips and tons more essential advice on how to ride faster, get stronger, recover smarter, shed pounds, and take your riding to the next level in The BICYCLING Big Book of Training edited by Danielle Kosecki, $22, rodalestore.com.

Set a goal for every ride, even if the goal is recovery.