Addictions can be a tricky situation to approach, as a surprising amount of people suffer from a variety addictions. Be it nicotine, alcohol, or other substances. In the 1970’s, the first acupuncture detoxification clinic in the United States opened at the Lincoln Memorial Hospital in New York City. Since that time, there have been detoxification clinics opened in San Francisco, Chicago, Miami, and other cities across the US. Acupuncture is beneficial in treating addictions to a wide range of drugs including barbiturates, cocaine, and nicotine. According to the National Council on Alcoholism and Drug Dependence, one in every 12 adults suffer from alcohol abuse or dependence. The National Institute on Drug Abuse claims that 35 million people try to end their nicotine addiction every year, and “85% of those who try to quit on their own relapse, most within a week.” 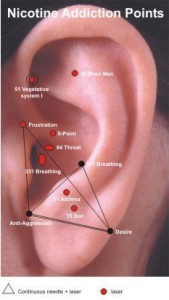 Why is it so hard to end our addictions? Well, our body goes through physical and emotional changes and often the withdrawal symptoms are too hard to overcome, especially if stress rises. In the 1970s Dr. H.L. Wen was experimenting with “electroacupuncture for pre-operative anesthesia on patients addicted to opiates, when he reported that the electroacupuncture did more than act as anesthesia…it also dramatically decreased the patients’ withdrawal symptoms. ” As more research was done on how acupuncture can decrease these symptoms, new techniques were being developed. At the Pacific College of Oriental Medicine, Brian Bender, LAc practices 5-Element Acupuncture; “it’s his goal when treating someone with an addiction to determine which element is our of balance. He accomplishes this by using sensory methods such as: color, odor, sound and the emotion(s) of the patient.” Both Bender and Donna Keefe LAc believe that addicts often turn to substances because they’re experiencing a lot of imbalance. Keefe says, “when an addict is suffering from an imbalance, they are using a substance like alcohol to self-medicate;” she also believes that acupuncture can “help patients get back to a ‘para-sympathetic’ state on their own, where they’re not in ‘fight or flight’ mode, but where they feel most like their true self.” Emotional connections to the substance can be treated,  which helps to calm the nervous system. Keefe has also been told by Western doctors that their addiction patients who got acupuncture show up to their sessions more often and typically have a faster healing process.

Herbal treatments are also recommended as a continuing treatment method, in between acupuncture treatments, when patients are most likely to have cravings for alcohol or whatever substance they’re trying to let go of.

Addictions are hard to say goodbye to, but in the long run your body and mind will thank you. If you could use a little help ending your addiction, give our office a call and see what we can do for you.

For more information, visit our sources at: