In this article written by Lecia Bushak, she explains the benefits of acupuncture and how it can help lower blood pressure! 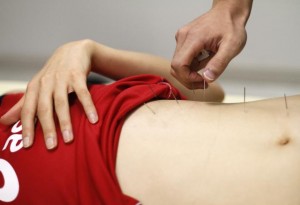 Acupuncture — the ancient Chinese treatment of inserting very thin needles into your skin as a therapy for chronic pain — has for a long time been seen as a traditional form of medicine without any real scientific benefits. However, more and more research has been proving that acupuncture has viable health benefits, from improving skin to reducing pain and stress — and now, even lowering blood pressure.

The latest study, published in the journal Medical Acupuncture, examined the effects of acupuncture on 65 hypertensive patients who weren’t on any hypertension meds. The participants were divided into two groups. The first group received electroacupuncture (low-intensity electrical stimulation on different needle points in the body) on their inner wrists and below their knees, and 70 percent of the participants saw a reduction in blood pressure, an improvement that lasted over a month. This group also saw a reduction of blood concentration levels of norepinephrine, a hormone and neurotransmitter that constricts blood vessels and elevates blood pressure.

Interestingly, it appears that the location of electroacupuncture — such as whether it’s in the wrists, arms, or legs — plays a large role in determining its efficacy. The second group received electroacupuncture on their forearm and lower leg, but they didn’t see the same lowered blood pressure as the first group.

“This clinical study is the culmination of more than a decade of bench research in this area,” Dr. John Longhurst, a cardiologist and an author of the study, said in the press release. “By using Western scientific rigor to validate an ancient Eastern therapy, we feel we have integrated Chinese and Western medicine and provided a beneficial guideline for treating a disease that affects millions in the U.S.”

Traditional Chinese physicians believe that acupuncture is a matter of balancing energy flow throughout the body. This energy or life force, known as “qi,” flows through certain points in the body known as meridians. When the acupuncturist inserts a needle into the meridian, the qi will rebalance itself. The science behind it, of course, is still being investigated, but generally acupuncture has shown the ability to stimulate nerves in these points, releasing chemicals in the muscles, spinal cord, and brain. The cascading release of chemicals and hormones can have an impact on chronic pain and even overall mental health.

Acupuncture has been used to treat oral pain, headaches, muscle tension, and even menstrual cramps. Other studies have shown acupuncture’s effects can be seen in brain activity changes — especially in areas that process pain. But whether acupuncture truly relieves pain or allows a placebo effect to take hold is still being debated.

And when it comes to blood pressure, acupuncture may reduce your hypertension — but only if you’re not taking any other hypertension medicine. The researchers note that further research will need to be done before they can claim acupuncture works well as a supplement to other medications.