The Tour is Coming: How Acupuncture Helps Cyclists Win! 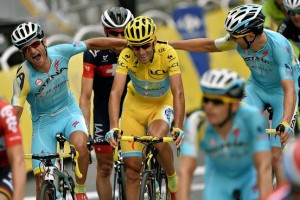 VIERZON, France—The mere mention of one of Vincenzo Nibali’s secrets on his way to victory at the Tour de France on Sunday is enough to make any cycling fan nervous: Needles on the bus. Almost every day.

But these aren’t the kind of needles that have dented cycling’s credibility for decades. When Team Astana uses them to treat Nibali, nothing is injected, nothing is extracted.

“It’s those little extra details that can help us,” Nibali said when he was asked about the treatment by a Belgian television station. “Maybe now others will also use this technique.”

This summer in France, Astana seemed to be the only team to bring its own acupuncturist to the Tour, a Belgian named Eddy de Smedt. For most of the year, he runs a private acupuncture practice and treats athletes outside of Brussels. But for the past three years, he has also worked for the Kazakh cycling outfit, including at last year’s Tour and last spring’s Giro d’Italia.

“There’s four doctors, two osteopaths, 10 to 12 physios, and then you’ve got me,” he said on Saturday

Throughout the Tour, De Smedt has visited with all of the Astana riders twice a day—once before stages in the soigneur’s room at the back of the team bus and once at night in the team hotel. Working quickly and carefully, he uses six to 10 needles about an inch long at key points along the riders’ legs, feet, hands and even their heads, he said, “to promote recovery and relaxation of the muscles.”

Once they’re in, De Smedt turns and twists the needles to stimulate those points, an image that isn’t for the squeamish. Although the cyclists didn’t take long to buy into it, especially Nibali.

As for the other kind of needles, Nibali has answered the inevitable questions about doping on most days during this Tour, especially as he racked up the most stage victories (four) of any champion since at least 2006. His directeur sportif, Team Astana’s Giuseppe Martinelli, insisted Nibali’s victory was clean.

De Smedt pointed out that acupuncture can’t cure anything structural — strained muscles stay strained, a broken collarbone stays broken. But it can work as a palliative measure. “If a rider has some pain, the goal is to keep him in the Tour,” he said. “Then after, a correct medical diagnosis should be done.”